(or A Day to Forget)

I wrote this out last year, long before I started even thinking about a blog.  It was too much for Facebook, and seems more appropriate to post here anyways, this marking the 15th anniversary of that horrible day.

Last night (9/11/2014) as we looked over the river to the beams of light, what I noticed most was the sound of the airplanes.  Lots of airplanes. 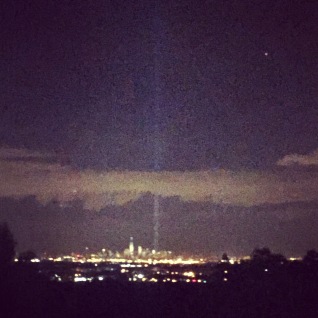 And it made me remember the silence of the city that September night.  It was eerily silent and still, except of course for the steady stream of the sound of sirens.  But even those seemed to fade into the background, leaving the world all too quiet.

I remember the smell.  It’s a smell I would much rather forget, but don’t think I ever will.   It was an unavoidable smell that hung over the city for months – a combination of burning jet fuel and melting iron, dust and ash, flesh and death.

I didn’t even realize what day it was last year, until a customer service rep I was speaking to on the phone said “we are all thinking about all of you in New York today.”  And then it hit me.  And I realized many people do not need reminding of that day, no matter your intentions.

I remember the futility of returning to work.  Of seeing remains of one of the towers, still smoldering, from the front door of our building.  How would I be able to work with that going on right outside my office door?

I remember my good fortune to have overslept that morning, to have been safely in my illegal sub-let apartment.  I could easily have been caught in the subway or in the crush of people fleeing for safety.  I could have seen more than I did.

I remember being glued to the TV, in the hope that we would be told something definitive, that someone would have answers.  But we just got more questions.  I remember the phones going out, then all but one TV station.

I remember going to bed that night, not sure if the city would be bombed.  I remember my friend asking me if we were going to be okay, and responding “I don’t know.”

I remember going out to dinner in the nights that followed.  The restaurants all had modified menus, as no food had been delivered in days.  We didn’t care.  We just needed to be with other people.  Food was secondary.  Which was just as well.  It’s hard to eat with the breeze carrying dust balls and the smell of death up 2nd Avenue.

When I finally got back to Atlanta (where I was actually living – I was just working in New York at the time) a few weeks later (via train – I had packed up everything that I had managed to acquire in my little sublet, not sure if I would ever return), I went to church, looking for solace.  There was much talk of hope.  I remember being outraged.  How could anyone already be talking of hope?   I had just gotten home.  New York was still burning.  We were so far away from talking about hope.

People in Atlanta worried about the Bank of America building being attacked.  I found this so ludicrous.  Atlantans quickly went back to business as usual.  Life for many New Yorkers never went back to normal.

I didn’t really cry until I got back to Atlanta.  Like many I was just in shock.  I had to be 1000 miles away before I could begin to process what happened.

My wife and I had met before 9/11 but we hadn’t started dating.  However she was the first person I emailed once I got my laptop back.  We had our first date at the end of October.  And the rest is history.

My mom thinks 9/11 made me run into the arms of the person nearest to me.  That’s not quite true.  But the shared experience of navigating life in a post-9/11 New York definitely made us closer, intensified a love that was already blooming.  It made us all reassess priorities and made me realize I could no longer continue to pretend to be someone I wasn’t.  Life was too short.  It could all change in an instant.

We have never been to the memorial.  I don’t know any New Yorkers who have.  I suppose we will go if our kids ever ask to see it.  I have a hard time relating to people who want to visit it, who post pictures.  I guess we lived it.  We don’t need to see it again.  We saw it the first time around.  We don’t need pictures.  The images and smells and sounds are forever etched in our memories.

“Everyone should have a museum dedicated to the worst day of their life and be forced to attend it with a bunch of tourists from Denmark. […]Or maybe worse, watch it be co-opted by people who want, for whatever reason, to feel that connection so acutely.” ~Steve Kandell, BuzzFeed in “The Worst Day Of My Life Is Now New York’s Hottest Tourist Attraction”

Maybe I have more of a problem with the museum than the memorial.  Maybe the museum isn’t for us but for future generations.  My grandmother was thrilled that a memorial to WWII was finally added to the Mall in D.C.  I remember visiting it with her.  But I don’t remember her talking about wanting to visit any WWII museums.

The world changed that day.  And hasn’t been the same since.

So put down your flags – this isn’t a day for nationalism.  Instead it is a day to hold your loved ones tight, to give thanks for what we do have, in this moment.

Because you never know what tomorrow will bring.